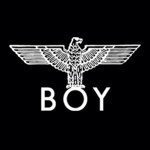 Founded by Stephane Raynor in 1976, the story of BOY is a true one off, in that that the wildest rumours and legends that surround it couldn’t hope to compete with the reality. Beloved by the underground, but frequently courted by an overground hungry for a piece of BOY’s trademark attitude, it remains the label that everyone wants in on.

From Warhol, to Madonna, Punks through to New Romantics, club kids to fashionistas, all have worn BOY. Adopted as the uniform of choice for every youth movement that has mattered, the brand has outlived them all, with the unmistakeable spirit that underpins all things BOY remaining the same today as when it was first formed…

The rich history of the brand inevitably reads like a ‘who’s who’ of fashion and music. Prior to conceiving BOY, Stephane had been selling 50s clothing to Malcom Mclaren at his shop ‘Let it Rock’ before opening the legendary style outlet ‘Acme Attractions’ – which counted punk DJ and film maker Don Letts, and ex Pil member and current Rough Trade MD Jeanette Lee on its payroll.

It was when he opened the BOY store on the Kings Rd in 1976 that things really began to take shape though. Every day of trading the streets outside the shop would be packed with its elaborately dressed and styled clientele, whilst inside Billy Idol worked the till and Phillip Salon made the tea. BOY was the epicentre of a new dawn in both fashion and music, defining the spirit of punk and birthing the New Romantic scene that appeared in its wake.

Raynor briefly lent his hand to opening another famed store, PX, in 1978, where under his guidance the scene surrounding him and his enterprises (led by Visage’s Steve Strange and DJ Rusty Egan) came to be known as the infamous ‘Blitz Kids’ (the original club kids), before returning his full focus to BOY LONDON in 1980.

It was from here that the creative element of BOY came into its own and things started to go into the stratosphere. Fuelled by a constant desire for reinvention and a hunger to set innovative new styles and trends, BOY quickly became the most iconic and talked about label on the planet.

This was the time when the label’s famously riotous catwalk presentations (as much art happenings as they were runway shows) were the wildest events in the fashion calendar. Where the brands Parisian nightclub ‘CLUB BOY’ rose to notoriety as the most scandalous thing to hit the city in decades, before finally imploding in 1985 at the height of its notoriety.

Yet amongst all the chaos surrounding the operation one thing was abundantly clear: BOY had become THE must have label of the era, snapped up by those who could get it and imitated by those that couldn’t. The prominence of the label continued throughout the 80s and into the 90s, where trademark BOY tees were adopted as the uniform of choice for the acid house movement and the Ibiza explosion, and were an unmissable presence during the summer of love.

Then, at the height of its fame, BOY finally buckled beneath the numerical demands of an international buyers list that had spiralled out of control, causing the label to indefinitely close its books…

The story doesn’t end there though. Word of mouth and a passion for the brand amongst those versed in its history kept the label alive throughout the nineties. In second hand stores and charity shops the world over, original BOY pieces became the most fetishised of finds. Then, in 2007 rumours began to circulate that the legendary label was returning. Sure enough, Stephane’s latest venture, a store named SICK (located on Redchuch Street in the heart of East London), soon emerged and with it came the relaunch of BOY.

True to the original spirit of BOY, Sick is not a shop in any conventional sense, but a rather continually shape shifting whirlwind of basement parties, living art instillations and design studios. This ‘anything goes’ approach to the space restored the trademark BOY notoriety to the fashion landscape, whilst also introducing the attitude of the label to a whole new generation of fans.

Packed with one off original pieces and classic BOY prints (as well as new collaborations with cutting edge designers), the fact the store sells out on a weekly basis tells you everything you need to know; times may have changed, but BOY remains as influential, and in demand, as ever.