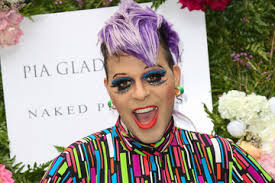 Sham Ibrahim is an American artist, actor, and film maker! He was born in Peoria Illinois to parents of Middle Eastern descent!  At 17, he moved to San Francisco and enrolled in the Academy of Art College, where he spent more of his time gogo dancing at local nightclubs with a fake id and hanging out with famous drag queens like Heklina, Juanita Moore, Mr. David and Miz Ana Matronic at the legendary nightclub Trannyshack! In 1999 he left art school, moved to Los Angeles  and stared working as an actor taking tiny parts in music videos, television shows, commercials, and films- including a small part as a critically injured goth on NBC’s hit drama E.R!! While he worked on movie sets and socialized in Hollywood, he would meet celebrities, photograph them, and make digital pop art portraits of them!! In 2004, he started a weekly nightclub in West Hollywood called Gossip, where Shams celebrity friends like Alexis Arquette, Boy George, Andy Dick, Angelyne, Andy Warhol legend Holly Woodlawn and many others would come by!! Sham’s nightclub was like a mini-factory where he would photograph and film the stars  them and hand them portraits!! In 2005, Sham posed for legendary fashion photogrpaher Steven Meisel (who photographed Madonna’s Like A Virgin album cover and her Sex book) alongside supermodels Karen Elson and Jessica Stam for Itallian Vogue as part of an editorial called “Nighclubbing”!! In 2006, Sham was hired by Randy Barbato and Fenton Bailey, the owners and founders of WORLD OF WONDER, as an associate producer on the HBO documentary Heidi Fleiss: The Would Be Madam of Crystal.  World Of Wonder is a Hollywood production company responsible for producing many successful award winning television shows, documentaries, and feature films such as Ru Paul’s Drag Race, Party Monster, Million Dollar Listing, Tori and Dean, and the Eyes of Tammy Faye. In 2007, World of Wonder gave Sham his first Hollywood gallery show at a store front space that was attached to their production headquarters on Hollywood Blvd. Thanks to the exposure at World of Wonder Storefront Gallery, Sham made international headlines in 2009 after he did a portrait of a police photo depicting Rihanna’s battered face. NBC news, E! Entertainment and many other major press outlets reported on the story. Sham made his reality television debut in 2005 when he breifly appearead on Bravo Television’s hit show Vanderpump Rules and gifgted LIsa Vanderpump, Ken Todd, and their dog Giggy with fabulous Shampop portraits!! Sham has given celebrity portraits to many celebrities such as Paris Hilton, T Pain, Joan Collins, Debbie Harry, Ru Paul, Janice Dickinson, Tori Spelling, Lindsay Lohan, Bobby Brown, Carmen Electra, K Michelle, Joyce Giraud, Betsey Johnson, Lisa Rinna, Perez Hilton, Lita Ford, and so many others!! These days, Sham continues to do his artwork, acting, and filmmaking and he gets his inspiration from the world at large. Thank you for visiting shampop.com and remeber- your favorite artist SHAM LOVES YOU!!!! Check out the pics and watch the videos below for more from your favorite artist, Sham Ibrahim!!!!